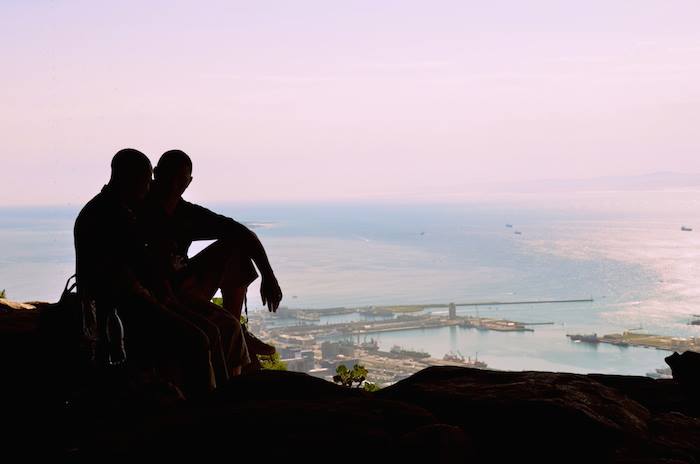 So here we are again – one week passed and incredibly much happened.. 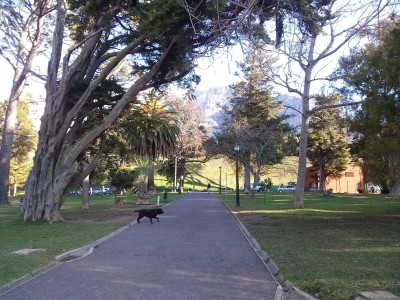 De waal park near to my home 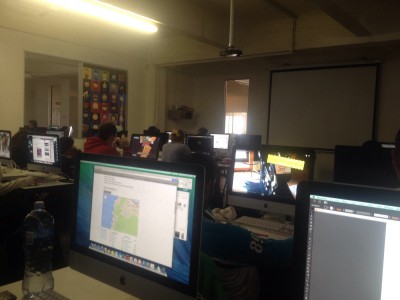 University: on my first day at FoD they did not seem to be very ready to welcome a foreign student at all. They did not know where I had to go neither what I'll need to start. Eventually it all got sorted out very quickly. There I was, sitting in a big classroom with no other exchange student (so I thought) and around 16 other students not wanting to talk. They did not even talk among themselves. The course digital Publishing – PDF Animations started, two people per desk, everyone on an iMac. The first day teaching was Teacher-centred (: teacher explaining something and students doing it at the same time) which was quite nice. From 8:45 to 12:15 our teacher Andrew gave us all his InDesign animation knowledge. Somewhat around 10:00 another exchange student showed up and was put beside me. So "hello how are you, what's your name, blabla" just to find out that Annika is from Germany, born in Bonn actually (the city where I was living before CT) – Boom suddenly awesomeness! After school we went out to eat and talk. We went along very well. She told me about that german-american project she is helping with here in cape town. They're building a children's theater in Langa, a Township, for the poor (more about that in a few). So we decided that if we're cool and if I like the township project we should share a car and do stuff together. 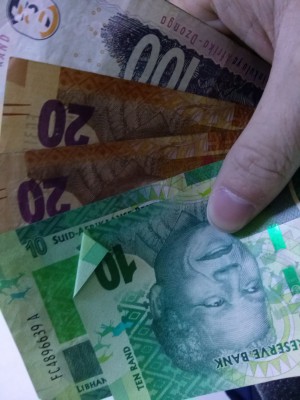 Just to finish the university part of my story: the next 4 days at university were somewhat boring. Tuesday to Thursday: everyone works on his own. However I managed to find a hack in InDesign to be able to add several animation on one object, what usually is not possible which surprised the Teacher since he did not knew it before. Big Time. Oh and Thursday the other students started to talk to us. Great day. We were invited in their FB group and got to know them better. They are all pretty young (19 is the average) most living by their parents (which seems usual here, I have only met locals still living in their parents house yet, even the older ones). As we asked if they want to hang around after school they told us that they never do stuff after school. Well most have to work. It's a pity, but it's the same in Germany 'so. Friday we had the worthless excursion I've ever had. We drove to the waterfront to attend an Open Design Talk. Wow great, right? Well, actually no – first we were tempted with a free lunch, but there was none, well if there was one it must have been hidden because none of us saw it – second we thought that we could see the exhibition afterwards, but no, we drove back immediately – third the speech was useless. I mean, the topic was design right? But the speaker explained us roller derby. Yeah sure, it certainly is a great sport, but.. What the f* does that have to do with design? Where is the relevance? – She started with “how roller derby empowered her as a woman” then “How roller derby helped her to cure her depressions” and ended with “the meaning of life is to find a sport you love, why not roller derby”. Is this a joke? Apparently not. Ok well you can't say much after 5 days. So far it's somewhat different as in germany and yeah I'm learning new Stuff. I'll post some work I did here soon. 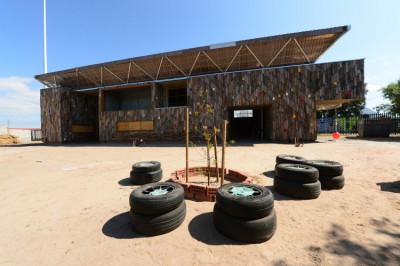 The children's theater in Langa so far. 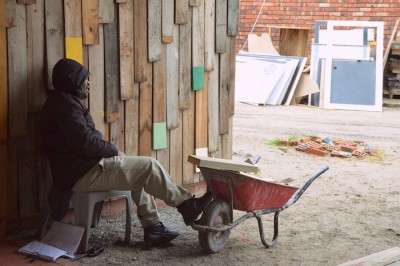 one of the locals

The Project: as I wrote, Annika introduced me to a construction site where germans are building a theater for the children in the middle of a township called Langa. Just google "dangerous places in south africa" and you'll be told to never ever go to a township without guide (not even drive through). Well we do, and no one of the project has ever been mugged there (however some have been in city center). Maybe also because we're leaving in the night. Maybe because people there know we're there to help them. But I thought it would be more frightening there. I somehow have more fear in city center than there. Well you have to be on guard anywhere. Never forget that you're still in africa.. “People get shot for 20R here” (~1,30€). The children's theater project is a project of students in architecture from the RWTH Aachen, the Peter Behrens School of Architecture Düsseldorf and the Georgia Institute of Technology (Atlanta), if you would like to find out more, visit their website via http://designdevelopbuild.ddb-sa.com/. So I helped them out twice yet and will be there as often as possible. The theater should be finished by the end of september. So far there were the 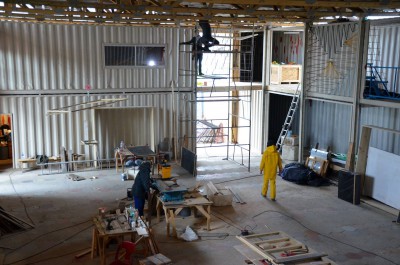 students from Düsseldorf and some locals. They are all awesome. It's sad that they leave this Wednesday. But about 20 students from Aachen will come to complete it.

Edit: at the time I am writing this I just got informed that there are riots in Langa, I'm unsure what happens wight now but I heard that the architects are escaping the site now. I hope that the theater don't get damaged and that the situation will be sorted out soon. 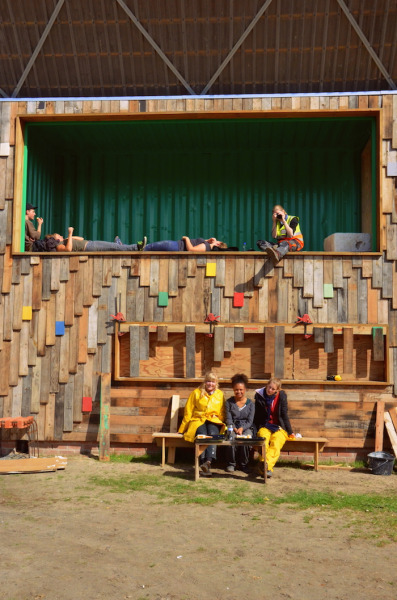 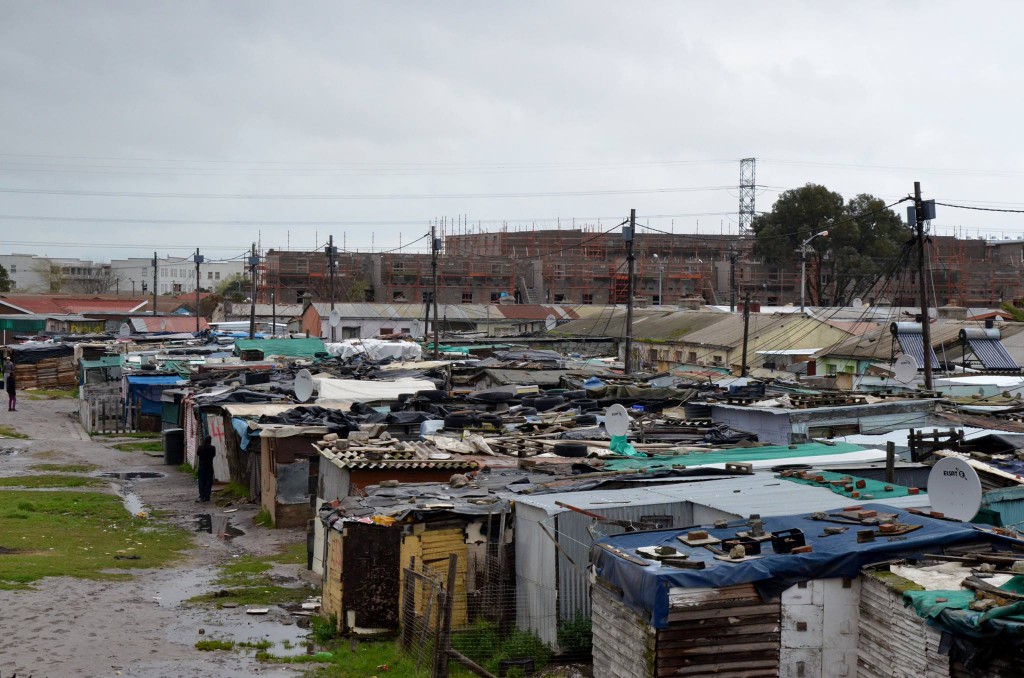 The township in Langa. 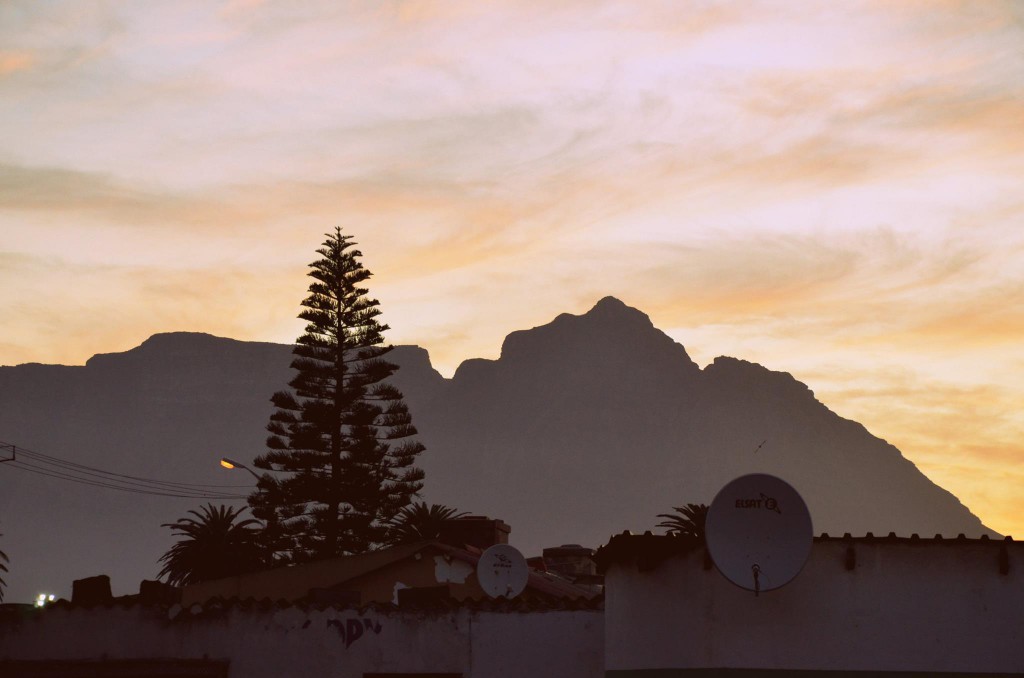 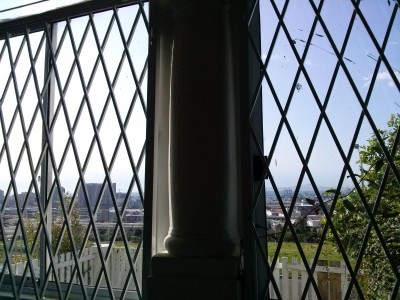 Cape Town: when I think cape town, I think apartheid. And yes, you still feel it. The apartheid only ended 1994 which is very recent. Cape Town still has no strong middle class which is the source of disaster. When I see mega rich people, they mostly are white. When I see poor people they're mostly black. When I see people chilling, they're mostly white. When I see people working or begging they're mostly black. Townships are largely black. So obviously criminals are usually black too. Well the legal criminals are still white but those who kill you with a knife on the street most likely aren't (even if the color has nothing to do with it). And those I spoke to about the apartheid (obviously I try to avoid it, so it were only 3 so far, 2 white and 1 black, but all having lived at that time) say that it is worse now than in the apartheid (which obviously is wrong). I had a great talk with a black taxi driver, the maxim of the conversation was: “once the oppressed become the oppressor it's very very dark times for you sir” – thinking about, it makes sense – “Now everyone get's oppressed, the blacks and the whites, by a very small group of blacks”. Yeah that is what I observed, the whites hide themselves in really big houses (I've been in some and have never seen so much wealth anywhere else yet, it's totally surreal) 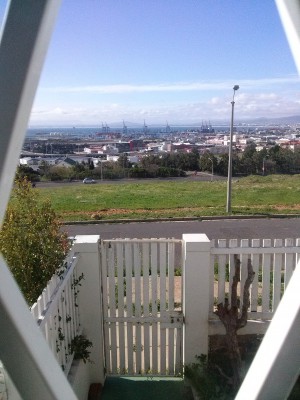 with high walls, electric wires, cameras, aggressive dogs, private security and alarm systems. Taking their super big cars even for 100 meters, not trusting anyone. Sure I'm not talking about everyone, some are very chilled, don't fear anything and walk around freely, but I'm talking about the most. Still, this is totally subjective. However, every local I spoke to and every visitor, really everyone, no exception, said they absolutely love cape town – which I can approve. Sure you're never feeling safe but the beauty of the city and the large-heartedness of most people is so awesome that I would recommend everyone to visit cape town. Random people become great friends out of nowhere. I really don't know why we are so conservative in germany. Just by walking through the city you meet someone with great stories to tell. The beauty of this city is just incomparable. 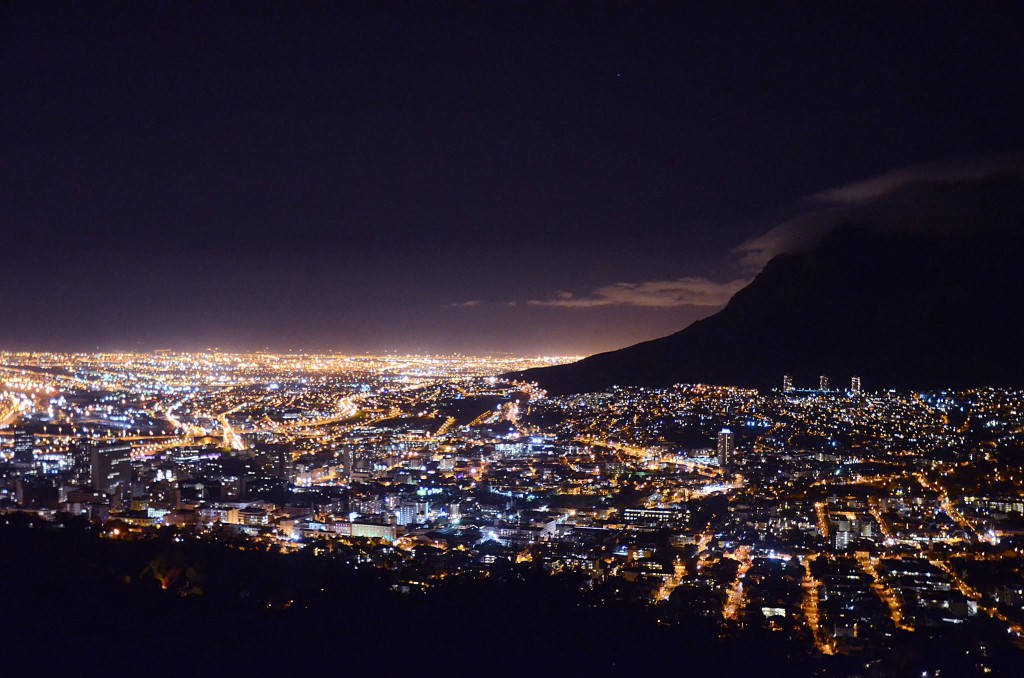 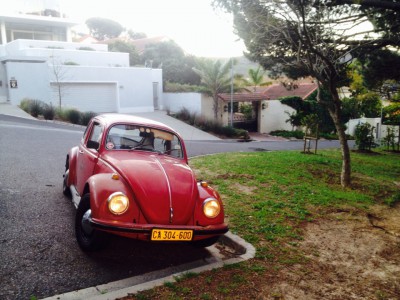 Car: Annika and I rented an old red VW beetle together for the three upcoming month. We call him Herbert. Herbert is very bitchy: some times the gears jump out or he turns off in the middle of the street or takes several tries to turn on, is in a bad condition and as loud as a plane but in the end it is such a beautiful and fun to drive car! Oh and we paid only 47R (~3€) p.p. per day with full comprehensive insurance and 24/24 rescue service and all km inclusive, which is ridiculous. At first it was super difficult to drive it, we spend one day driving around the block to get used to the car and driving on the left. At first it was pain but now I feel somewhat comfortable. 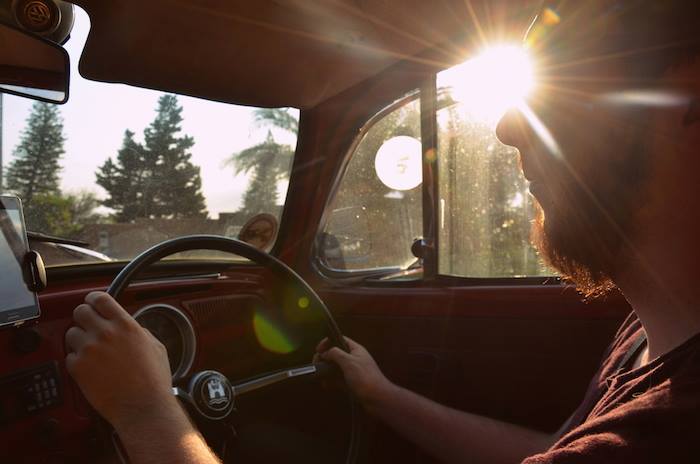 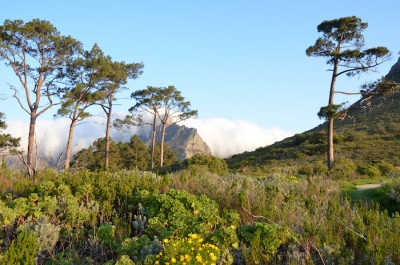 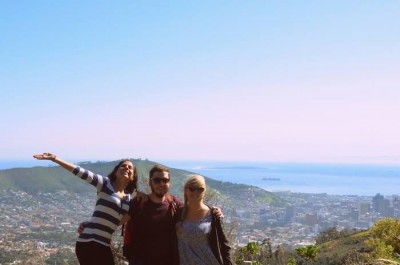 Activities: we went out to a place called yours truly (a super hip café/bar) and met a group of white locals which was very fun and very bizarre because some strange things happened that can't be described in a post. We met some french students and we also met Rima (I wrote with before with on couchsurfing). She's also staying for three-month here and new to Cape Town. She's a great girl, very open-minded. We all 3 come along very well so we did a lot together. The last days, we went hiking to the Woodstock caves on table mountain. We went out together with the architects to a place called waiting room, which has 3 floors: fist is a disco, second is a chill out area where you can sit on sofas or play foosball and the third is the roof-deck where is no music but great to meet people and talk. With the help of a foosball match 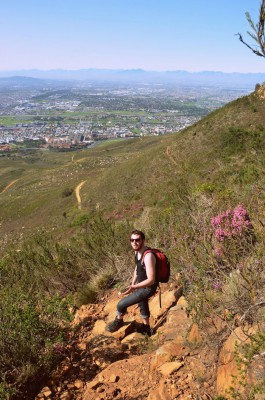 I met some apparently rich black local musicians who wanted to shoot a music video with me. The offer however seemed somewhat doubtful so I'm not sure if I'm doing it. The next day we went to camps bay. A super beautiful beach. Lastly, we watched a movie at Rima's place and had a great braai (barbecue) with her neighbours and housemates on their roof-deck at night with a beautiful view over the city. 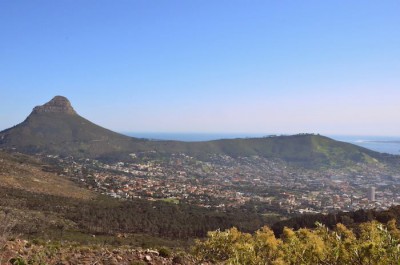 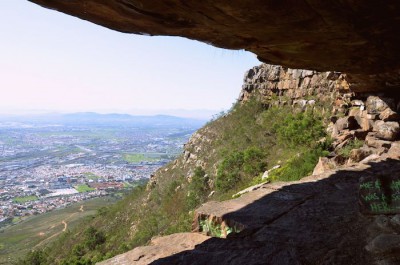 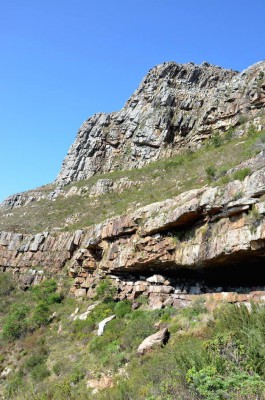 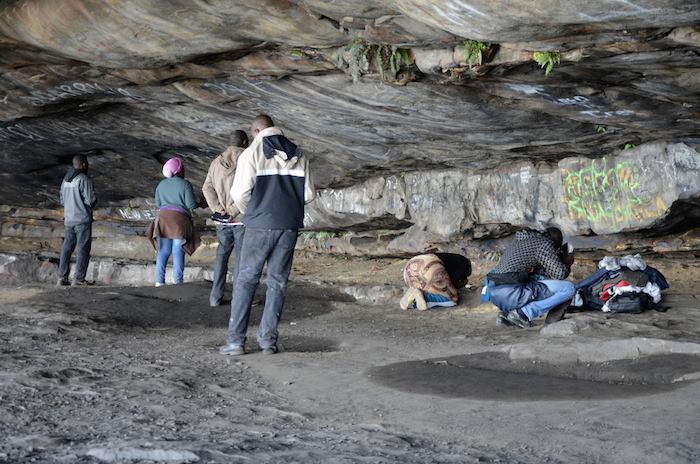 we were told that the caves on table mountain where religious places. We saw many people praying. 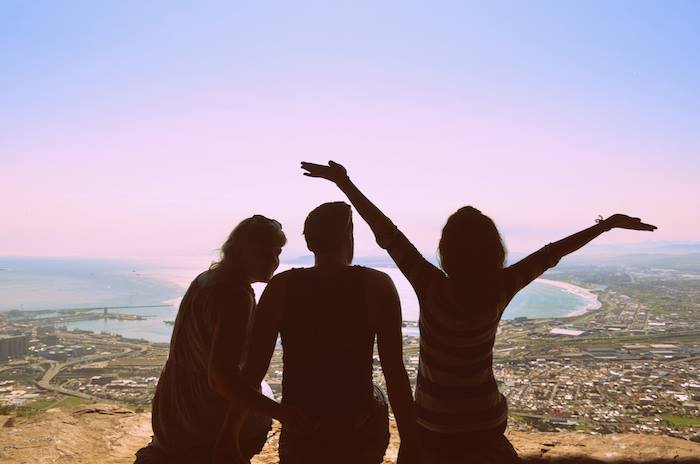 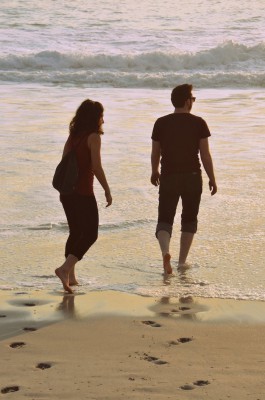 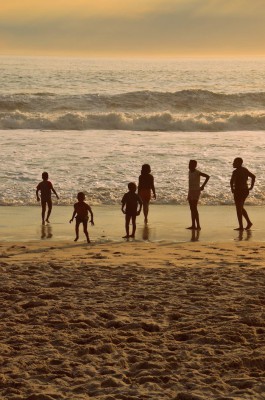 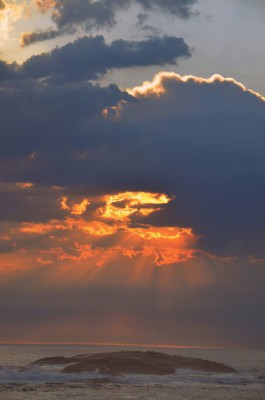 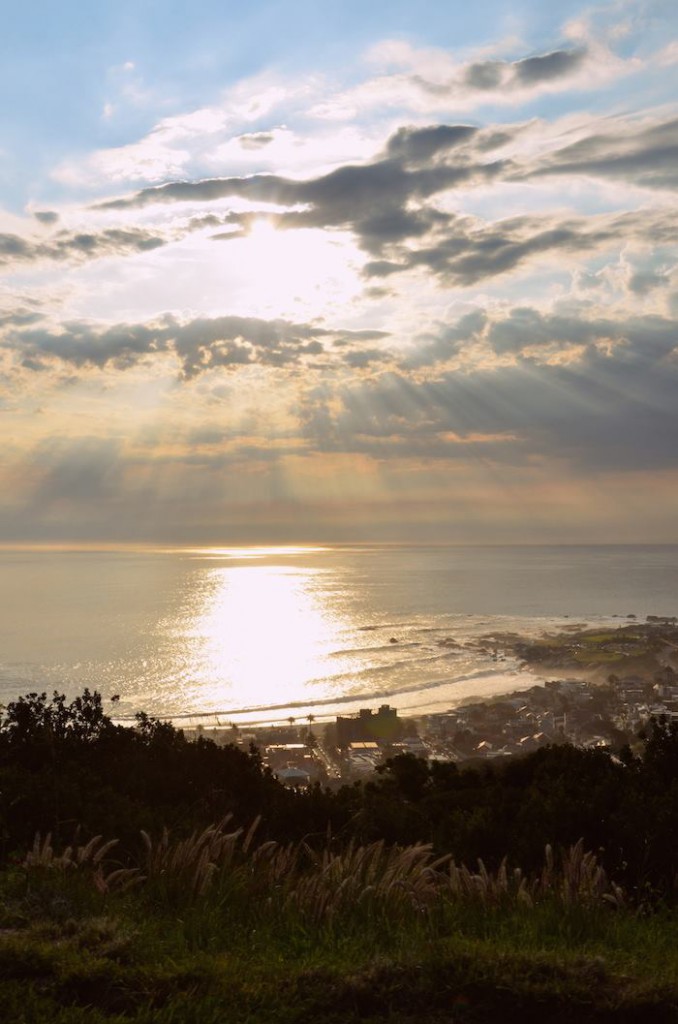 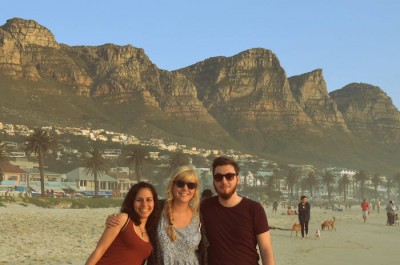 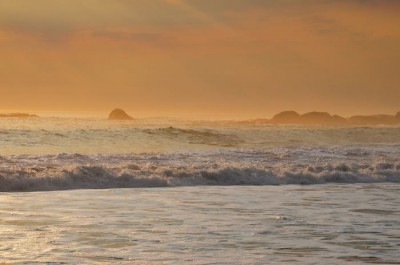 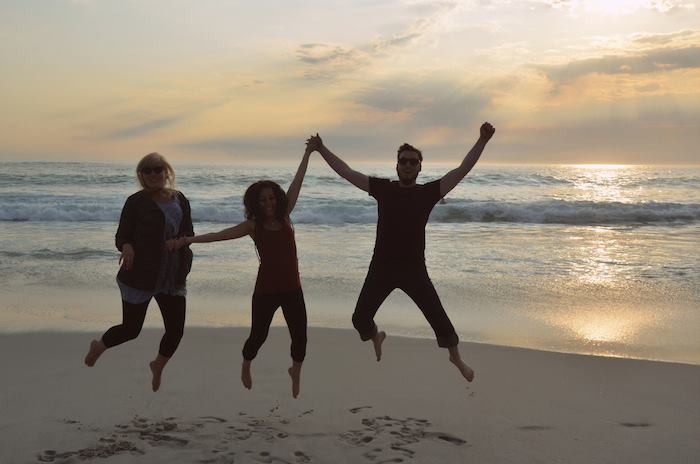 That's it for now, I hope you mates enjoyed reading. Subscribe to stay tuned for more adventures. See you soon.

PS: Annika shot most pictures you see here, her focus is on photography and in my opinion she is very talented. If you like her photographic style you're welcome to visit Annika's blog.