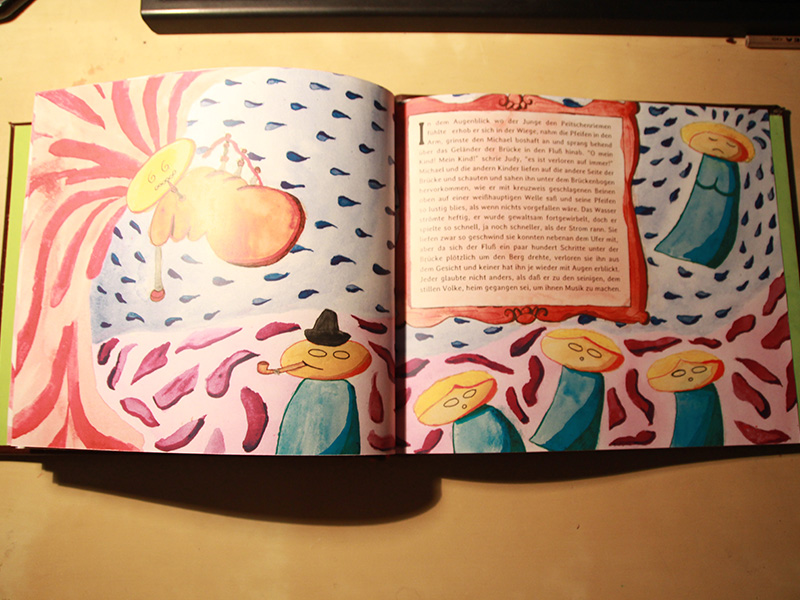 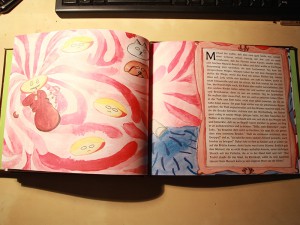 My task was to illustrate “the young piper” which is an old irish fairytale. It is the story of a family with four children, three are beautiful and one is ugly and handicapped. The handicapped one is also an asshole. He likes to tease everyone. So, people think he was exchanged by mean fairies. They want to test him by pinching his nose with a burning hot iron. But his mother, persuaded that he is her own son, protects him. One day an old bagpipe player, who travels from town to town playing for a living, come across. The kid seems attracted by the bagpipe and want’s it badly. He manages to get it and starts playing like a boss. As soon as he plays, the music force everything to dance. Even the chairs and desks. But as the young piper is an asshole he uses that skill to make the people fight against each other and to harm them. Hence the family is forced to move out. As they pass a river on their way, the young piper jumps into the water playing bagpipe while sweeping away. It is said that the young piper returned to his folk, the fairies, as he is a changeling. A changeling in this case is: when the fairies give birth to an ugly child they exchange it with a beautiful human.

Okay, pretty strange story isn't it? It's part of the Fairy legends and traditions of the South of Ireland (1834) by Croker, Thomas Crofton.

First, I wanted to illustrate it the traditional way. With nice fairy drawings and all. But as 90% of all fairy tales are drawn with boring traditional fairy images, it would be lame. That's why I went deeper into the story, thinking about its meaning and succeeded to interpret it: symbolically it’s a story about the Irish conflicts with the British. The changeling is an ugly stranger which invades the beautiful Irish family => The British invaded Ireland. The changeling is a little bastard who teases and harm the Irish => the Brits tortured the Irish. They try to fight the young piper but do not succeed as his mother protects him => the Irish tried to fight the Brits back several times but somehow they didn’t manage to get them off the isle. The young piper jumps into the river and sweeps away to his folk => finally 1922 the Irish manage to become the Irish Free State and the Brits went away over the water, back to their island.

I wanted to combine the tale with the history by using transparent inter layers. But I did not stick with that Idea as, in my opinion, it wasn't appealing enough.

So one more time I started from scratch. This time I focused on Irish music and modern fairy images since it’s the story of an Irish bagpipe player. I listened mainly to songs from the Dubliners. Those lyrics and melodies got me in a flow and I started to paint very music oriented illustrations: 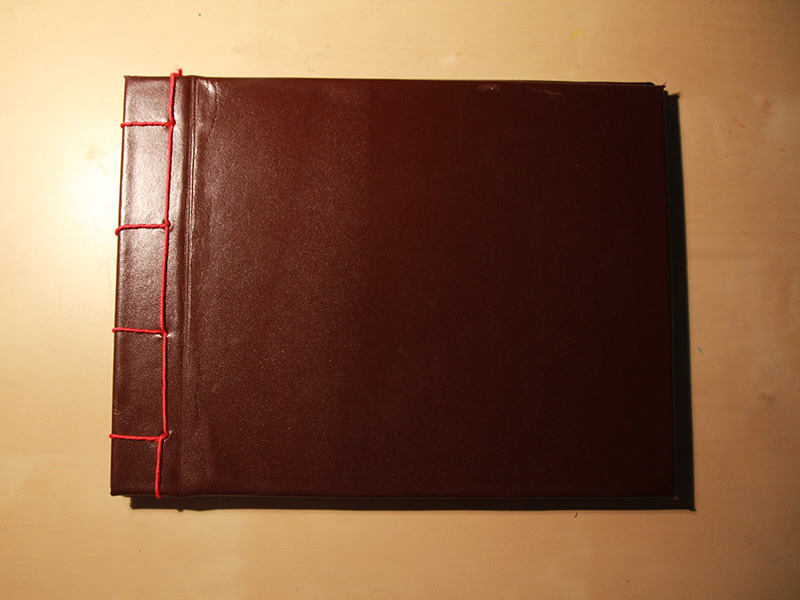 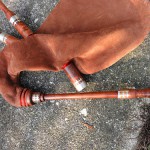 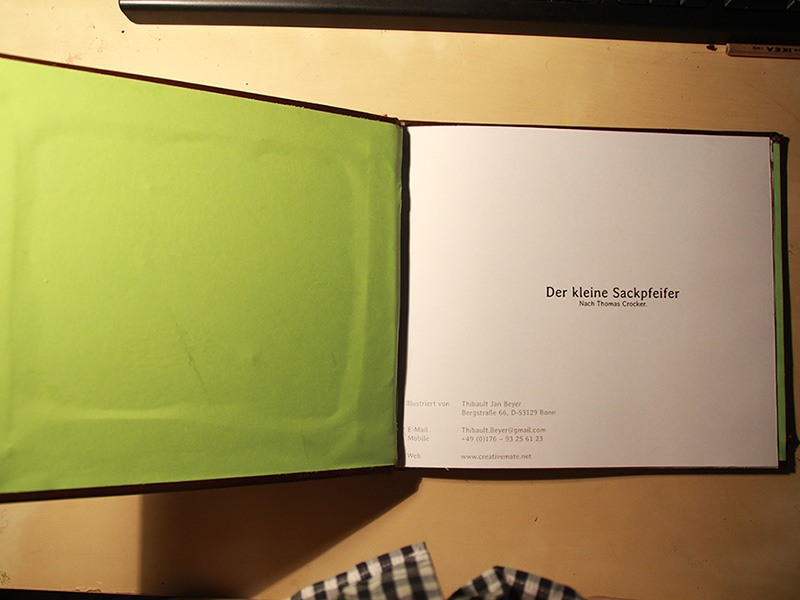 The Interior is green which is intended to project the reader to Ireland. As green is the countries main color, representing its amazing landscape. 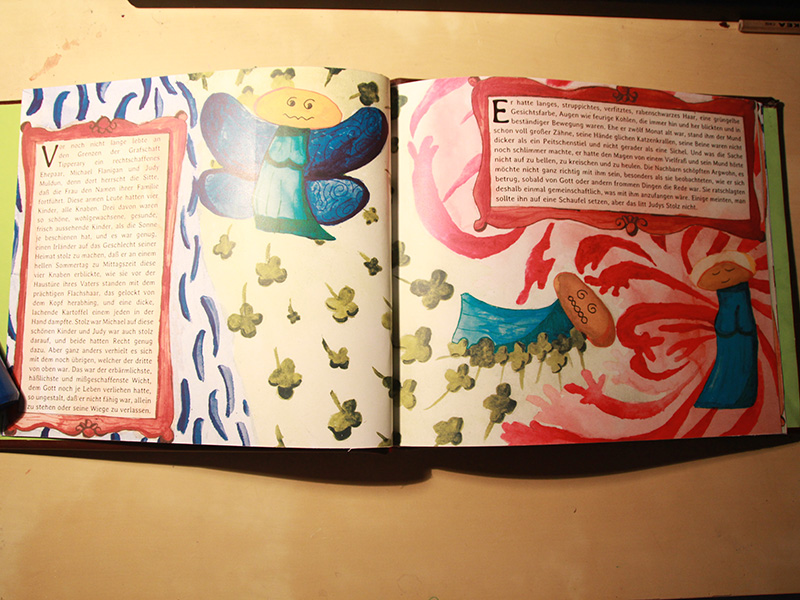 The first scene starts with a fairy image: the fairy coming from the river and bringing the changeling to the mother. The red hands are there to show that the mother accepts the child as her own. 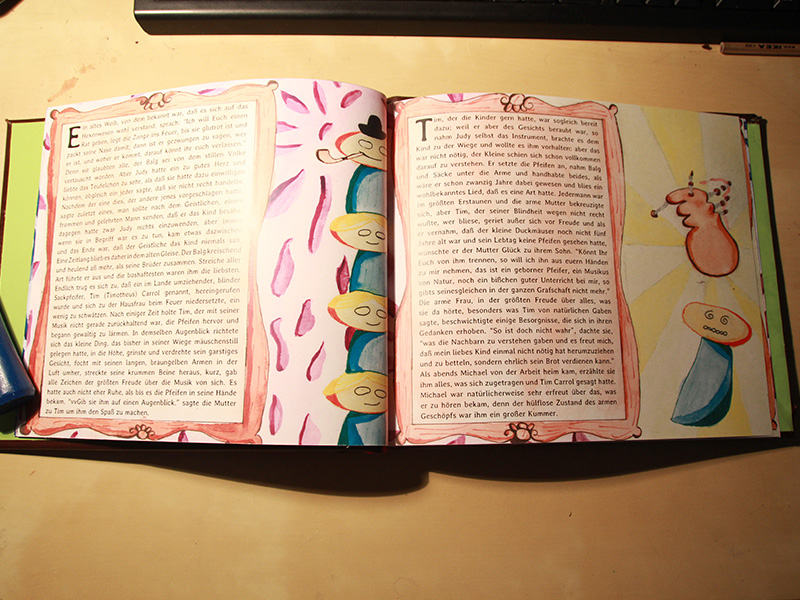 This page shows the rest of the family. Dad on top of his three beautiful children. On the right, the changeling who obtain the bagpipe. He’s not just getting it but literally becoming one. As you'll see the next page. 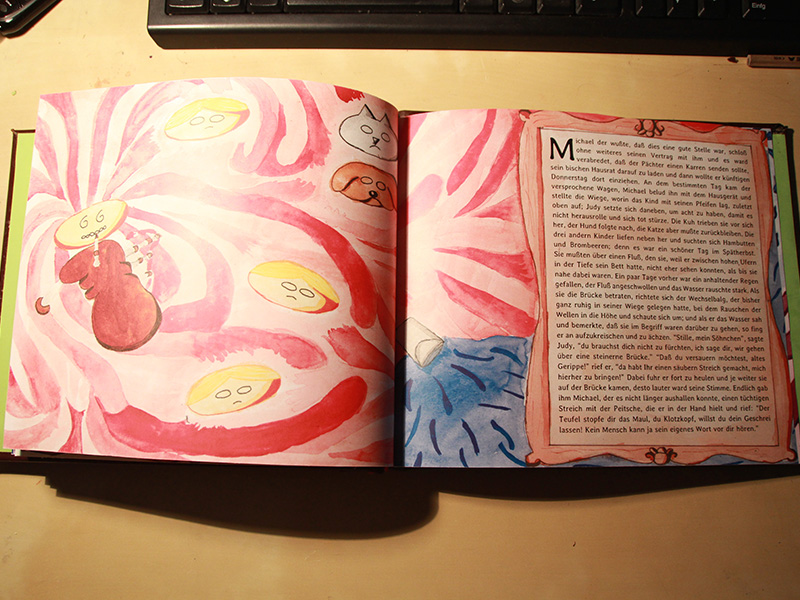 Here the changelings body has become a bagpipe and you can see how he’s teasing everyone, even the cat and the dog. The hands coming out of his head represent the music. In the story he’s able to take control of ones body as well as getting chairs and desks to dance. Also, note the bucket which is knocked over by the music.

That’s the last scene with the young piper jumping into the river and returning to the fairies. Here the tears of the mother form the river. On the bottom you have the father who’s quite happy because they can return home now, he disliked the kid anyway. And the shocked brothers.